The Book of Enlightenment

A short story based on true facts

A long time ago in a land far away there was a rather special book. The book was very, very big and shone like a full moon on a clear night, illuminating the soul of whoever read it. The whole book was filled with beautiful, clear and transparent writings that not only enlightened but also encouraged and liberated.
It contained many things: ballads, songs, hymns, wisdom, poetry, magic formulas, secret knowledge about the natural world, the sun and the stars and stories.
There were loads and loads of stories; stories about unseen realities, stories that spoke of the beginning and stories that spoke of what happened next. There were even stories that spoke of the future. And all through the book was the mention of a name. In the language of the people that lived so long ago in that land far, far away that name meant To Be.

Then came men from a different land, speaking a different language. They saw the big book and its beautiful shine. They saw its potential to strengthen and unite their people. So, they took the book, discarded the parts they didn't need, which was rather a lot, and translated the remaining bits into their own language, making adjustments here and there to ensure it would serve their purpose.
In the small part that remained there were still mentions of that one name. In the language of these strange men that name was written as JHWH. For reasons only known to them they decided that this name should not be spoken out loud. They decided that this name was too sacred, too holy to say out loud and instead one should say My Lord, which had the added advantage of indicating a male gender. To remind them that the name JHWH should not be spoken out loud they wrote the vowels of my Lord (Adonai in their language) underneath it. Together it would read 'Jehova'.

Hundreds and hundreds of years later, a man knocks on a door.
He calls himself a Jehova witness. Unknowing, he faithfully goes
door to door, committed to win over more souls. He waits patiently
for the door to open. In his hands he holds a small, used and abused,
dull black book.

In his latest book 'The Ark before Noah' professor Irving Finkel shows how the Hebrews, exiled to Babylon in the 6th century BC, came across a tradition of genuine flood stories and adapted them to their own theological purposes.

A lot but not all of the deleted stories were hidden in a jar in a place called Nag Hammadi in Upper Egypt. In December 1945 an Arabian farmer called Muhammed Ali al-Samman found the jar by accident. Inside the jar were thirteen leather books containing 52 scriptures. These scriptures are often referred to as the Nag Hammadi Library. All through the Book of Tales you will find references to these scriptures. 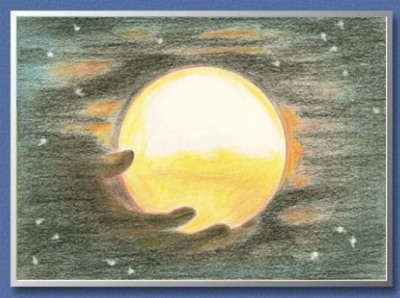 For further insights try some very special Angel Bread  >>
Visit Lady Truth ...  >>
... Or try the Truth Serum  >>
List of Tales based on the Nag Hammadi Scriptures  >>