"We know nothing about it, ask the hares."
Once upon a time close to the Western Sea of a land called India lay a grove studded with bel trees. And there a hare lived under a small palm shrub at the foot of a bel tree. 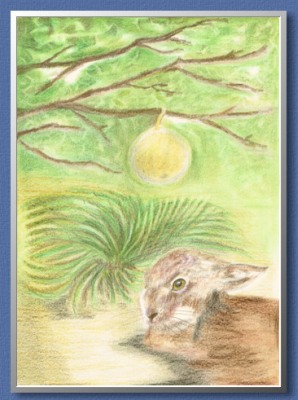 One day, after bringing his food back to the palm shrub at the foot of the bel tree, the hare thought to himself:
"If the earth were to fall to pieces, what would become of me?"
At that very moment a huge ripe bel fruit fell right on top of the palm shrub. With this the little animal jumped straight up in the air, convinced that the earth around him was indeed falling to pieces. And he fled away without ever looking back.
Another hare, who saw him flying along scared to death, asked him:

"Why are you running away looking so terrified?"

"But why, why?" the other repeated, racing after him.

Without looking back, the hare said:
"The earth is falling to pieces behind us."
So, the other hare fled after him. In the same way, another hare saw him and another. Until a hundred thousand hares were racing after him.

Then a deer saw them, and a leopard, and an antelope, and a buffalo, and a wild ass, and a rhino, and a tiger, and a lion, and an elephant and all asked:
"What is this?"
"The earth is falling to pieces!" was the reply. And all fled after the hare.

Then a great lion appeared. He saw the wild flight of animals and asked:

"What is this?"
"The earth is falling to pieces!" was the reply.
When he heard this the lion thought:

"There is no question of an earthquake. They must have misunderstood some sound they heard. If I don't make some great effort, this will end badly. I must save their lives." 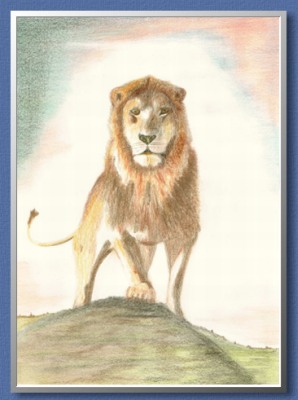 The great lion sprang to the top of the hill in front of them. Three times he roared his great lion's roar. All the animals were frightened out of their wits at the sound of the great lion. So they turned about, huddled up together and stayed where they were. The great lion padded in between their ranks and asked them:

"Why are you fleeing?"

"The earth is falling to pieces!"

"Who has seen it falling to pieces?"
"The elephants know about it!"
The lion asked the elephants, but they said:

"We know nothing about it. It is the lions who know!"

But the lions said:

"We know nothing about it. It is the tigers that know!"

"Where were you when you saw this?" the great lion asked.

"Oh sir, in the grove studded with bel trees, close to the Western Sea. There while resting under palm shrub at the foot of a bel tree I began to wonder where I would go if ever the earth should fall to pieces. And lo and behold! At that very moment I heard the crash of an earthquake and fled for all I was worth."

The great lion thought to himself: "No doubt a ripe bel fruit fell from above on the palm shrub and made a crash, so that this little fellow on hearing it thought that the earth was cracking up and fled. I better look into the matter."
He thereupon took the hare aside and spoke words of reassurance to the great herd of animals, saying:

"I shall go to find the exact truth about this earthquake. Whether in fact such a thing did or did not happen where the hare says it did. You are all to stay here until I come back."

With that he put the hare up on his back, galloped to the grove with his great lion's speed and put the hare down.
"Go on," he said, "Show me the place you were talking about."

"Oh sir, I would not dare."
"Come along, don't be afraid."
The hare, not daring to go near the bel tree, stood some way off. Pointing out to the lion the spot where he had heard the terrible crash, he said:
"There was a crash! May you fare well
on seeing the place in which I dwell.
But I for certain cannot say
Where the cause of trouble lay."
At these words the lion stepped up to the root of the bel tree and looked under the palm shrub where the hare had been. It was exactly the spot where a huge ripe bel fruit had fallen. He carefully made sure that there were indeed no signs of an earthquake. After this he put the hare back on his back and returned with his great lion's speed to the assembly of animals. He told them all that had happened. 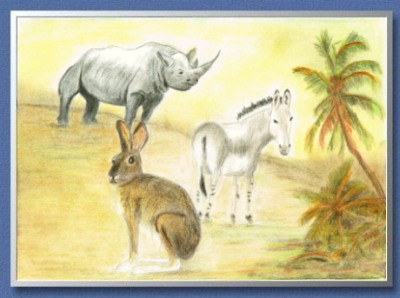 If it had not been for the great lion all the animals: the elephants, the lions, the tigers, the rhinos, the wild assess, the buffaloes, the antelopes, the leopards, the deer and the hares would in their flight all have fallen into the Eastern Sea and drowned.

PS
In 1808 the German Brothers Grimm wrote down the old tale of The Louse and the Flea, which has the same moral as the tale above.