... becoming the object of reverence among the people ...
There is, beside the Ganges, a city named Kusumapura, and in that city there lived an ascetic named Harasvamin who was fond of holy places. Being an ascetic, he lived a religious life, without possessions and devoting himself to meditation. He had been born a Brahman and so was of the highest caste; and as a Brahman he gained his living by begging, becoming the object of reverence among the people on account of the excellence of his penance.

Then one time as he went out begging, a wretch who begrudged his good qualities saw him in the distance and called out from the middle of the crowd:
"Do you not know what kind of deceitful ascetic we have here? He is it who has eaten up all the children in the town."
A second fellow of the same ilk, when he heard this, followed up by saying:
"True enough, I have heard people saying just the same thing."
"It is a fact," said a third, backing him up.
For the chain of evil gossip binds blame upon the good.

In this way the rumour went round gradually from ear to ear and was believed by everyone throughout the city. And all the citizens forcibly restrained their children within their houses, thinking that Harasvamin would take the young ones away and eat them all.

Then the Brahmans there assembled together, fearful lest their children should be slaughtered, and discussed banishing Harasvamin from the town.
As they did not dare speak openly about it for fear that he might get angry and gobble them up, they dispatched messengers instead. The messengers went off then and addressed him from a distance:
"The Brahmans say that you must leave this city."
At these words the astonished Harasvamin asked:
"For what reason?" and they answered him:
"You are eating the children here on sight."

When Harasvamin heard this he went to visit those Brahmans, wanting to reassure them and wishing to allay their fear. But when the Brahmans saw him coming they climbed in their terror high into the temple.
For people who are befuddled by rumour are not generally capable of discriminating.

Then Harasvamin, standing below those Brahmans, called each one of them by name and spoke to them as they stood above him:
"What now is this fanciful idea of yours, O Brahmans; why do you not consult among yourselves as to how many children I have eaten, and whose children and how many of each man's?"
As soon as they heard this, those Brahmans began to inquire one of another and it transpired that every single child of every single one of them was still alive.
In course of time other citizens who were appointed to investigate confirmed the matter was correct, whereupon all the people, Brahmans and merchants, declared:
"Truly this worthy man has been falsely accused by us fools; everybody's children are alive, so whose has he eaten?" 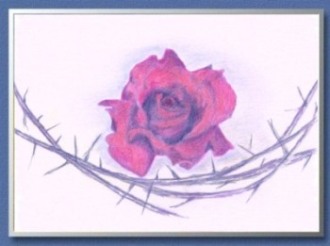 When all of them had spoken to this effect Harasvamin, his innocence proven, started out to leave the city.
What pleasure does a wise man, whose heart has been disgusted at the blame spread by wicked people, find in an evil place where he is falsely judged?
But then, when he was entreated by the Brahmans and the merchants bowing at his feet,
Harasvamin somewhat reluctantly agreed to remain there.
The End

'You shall not give false testimony against your neighbour.'
Number nine of the Ten Commandments in Christianity
The Bible, Deuteronomy 5:15

The effects of what can happen if the above commandment is ignored, is nicely demonstrated in the Indian tale 'A Nasty Rumour'. The fact that the same idea/principle is mentioned both in the Bible and in an even older Indian Tale strongly indicates its value and importance.

The problem is that it is not that easy to stick with 'you shall not give false testimony…' Most of the time we strongly believe that what we are saying is true. Unlike, the wretch in the story, hardly anybody ever comes up with a story completely out of the blue. That's what makes the above commandment a rather tricky one.

The person who started the witch-hunt recently on Cyprus most likely also was convinced that he or she was right.
What is scary about that incident is how quickly the rumour was believed, how quickly it spread and how quickly everything spiralled out of control, giving us all the more reason not to start a nasty rumour; true or false. Read more in the true tale below.


'Paedophile' forced to flee British Mob
Report by Michael Thedoulou and John Simpson
in The Times, Saturday 20 June 2015
A 19-year-old Bulgarian youth had to be helped to safety out of a hotel window after being attacked by a mob of British tourists who had wrongly accused him of being a paedophile, police in Cyprus said yesterday.
Several of those involved in the incident, at the Anastasia Beach Complex in Protaras, have since conceded that they "overreacted" after hearing rumours that child kidnappers disguised as waiters had targeted British children at the resort.

One source told The Times Newspaper: "My friend said this gypsy had put his arms around his son in the pool earlier that afternoon. Later we were outside by the pool having a drink and the wife was crying, saying the gypsy was back in the foyer. My friend ran in and punched him a few times, hard. The man was shocked and scared."
The source said that a crowd - described as "tipsy but not really drunk"- quickly gathered in the foyer of the hotel and grew increasingly hostile.
"Loads of people rushed into the foyer, saying that's the paedo."

The rumour that a paedophile gang had approached children spread quickly. One of those who joined the mob, and who also asked not to be named, said:
"We were told he'd been touching kids so we thought he was a f****** paedo. Just the next day I thought about it and felt sorry for the Bulgarian and especially the hotel. The whole story is a load of c***."

He said that the crowd accused a second man and almost attacked him, before spilling into the street and chasing a car that they thought was linked to the fictitious gang.
"I got involved because I thought it was a paedophile. I'd had a few drinks. But I woke up in the morning and thought it was blown out of all proportion.
There were also three guys in a Navarra outside and we chased them but the police stopped us and they chased the Navarra. Later the police told us the three had nothing to do with it."

The Bulgarian teenager, who lives on the island, was locked in a room at the four-star hotel for his own safety before being removed from the building via a window. He made a statement about the incident to the police, but has declined to press charges.
Officers dismissed suggestions that he had been filming children on his mobile phone.

Thomas Cook moved 50 guests to five-star accommodation at the opposite end of the island after the incident.