It is said that the Caliph Harun al-Rashid was restless one night and sent for his Wazir and said to him: " O, Ja'afar, I am sore wakeful and heavy-hearted this night. I desire of thee something that may solace my spirit and cause my breast to broaden with amusement." " I have a friend, said Ja'afar, his name is Ali the Persian. He has store of tales and pleasant stories that lighten the heart and make care depart. " Fetch him to me", said the Caliph. And so they did.
O, Ali, said the Caliph, my heart is heavy within me this night and it has come to my ear that you have great store of tales and anecdotes. So I desire of thee that you let me hear what will relieve my despondency and brighten my melancholy."
"O, Commander of the Faithful, shall I tell thee what I have seen with my eyes or what I have heard with my ears?" asked Ali the Persian.
The Caliph replied: "Anything you have seen aught worth telling, let me hear that."

"Know thou, O Commander of the Faithful, that some years ago I left my native city of Baghdad on a journey, carrying with me a light leathern bag. Presently I came to a certain city, where, as I was buying and selling behold, a sneaky rascal fell on me and seized my wallet, saying: "This is my bag and all which is in it is my property". Thereupon, I cried aloud: " Ho, one and all, deliver me from the hand of the vilest of oppressors!" But the folk said: "Come, both of you, to the Kazi and abide ye by his judgment with joint consent". So I agreed to submit myself to such decision.
We both presented ourselves before the Kazi, who asked: "What brings you here and what is your cause and your quarrel?"
"We are men at difference," I replied, "who appeal to thee and make complaint and submit ourselves to your judgement. "Which of you is the complainant?" asked the Kazi. And immediately that sneaky rascal stepped forward and said: "Allah preserve our lord the Kazi! Verily, this bag is my bag and all that is in it is my swag. It was lost from me and I found it with this man, mine enemy." I could not believe my ears that cunning fellow was making himself the claimant and complainant.

The Kazi then asked him: "When did you lose it?" And the scamp answered: "But yesterday, and I passed a sleepless night by reason of its loss." "And this be thy bag," said the Kazi, tell me what is in it."
And the scalawag answered: "There were in my bag
- two silver styles for eye-powder, antimony for the eyes and
- a handkerchief wherein I had laid two gilt cups and two      candlesticks.
- Moreover it contained two tents, two platters, two spoons and a      cushion and
- two leather rugs, two ewers and a brass tray and
- two basins and a cooking-pot and
- two water jars and a ladle and a sacking-needle and a she-cat and
- two bitches and a wooden trencher and
- two sacks and two saddles and a gown and
- two fur pelisses and a cow and
- two calves and a she-goat and
- two sheep and an ewe and
- two lambs, two green pavilions and a camel and
- two she-camels and a lioness and
- two lions and a she-bear and
- two jackals and a mattress and
- two sofas and an upper-chamber and
- two saloons and a portico and
- two sitting-rooms and a kitchen with two doors and
- a company of fellow men who will bear witness that the bag is my       bag."

Then the Kazi, said to me, And you, sir, what do you say?" Bewildered by the speech of the scamp I stepped forward and said: "Allah advance our lord the Kazi!
Verily, there was nothing in my wallet, save a little ruined tenement and another without a door and
- a dog-house and
- a boy's school and
- youths playing dice and
- tents and tent-ropes and
- the cities of Bassorah and Baghdad and
- the palace of Shaddad bin Ad and
- an ironsmith's forge and
- a fishing-net and cudgels and pickets and
- girls and boys and a thousand pimps who will testify that the bag is      my bag."

Now when the scalawag heard my word he wept and wailed and said:
"O my lord the Kazi, my bag is known and what is in it is a matter of renown. For in this bag there be castles and citadels and cranes and beasts of prey and men playing chess and draughts.
Furthermore, in this, my bag, is a brood-mare and two colts and a stallion and two blood-steeds and two long lances; and it also contains
- a lion and two hares and
- a city and two villages and
- a whore and two sharking panders and
- a hermaphrodite and two gallows-birds and
- a blind man and two wights with good sight and
- a limping cripple and two lamenters and
- a Christian ecclesiastic and two deacons and
- a patriarch and two monks and
- a Kazi and two assessors who will be evidence that the bag
is my bag."

And the Kazi said to me: "And what do you say, Ali?" Filled with rage I came forward and said: "Allah keep our lord the Kazi! I had in this, my bag,
- a coat of mail and a broadsword and armouries and a thousand      fighting arms and
- a sheep-fold with its pasturage and
- a thousand barking dogs and
- gardens, vines, flowers, sweet smelling herbs, figs and apples and
- statues and pictures and flagons and goblets and
- fair faced slave-girls and singing-women and
- marriage-feasts and tumult and clamour and
- great tracts of land and
- brothers of success, which were robbers and
- a company of daybreak-raiders with swords, spears, bows and      arrows and
- true friends and dear ones and Intimates and comrades and
- men imprisoned for punishment and cup-companions and
- a drum and flutes and flags and banners and
- boys and girls and brides, in all their wedding bravery and
- singing-girls and five Abyssinian women and three Hindi maidens      and
- four damsels of Al-Medinah and a score of Greek girls and
- eighty Kurdish dames and seventy Georgian ladies and
- Tigris and Euphrates and
- a fowling net and a flint and steel and many-columned Iram and
- thousand rogues and pimps and
- horse-courses and stables and
- mosques and baths and
- a builder and a carpenter and a plank and a nail and
- a black slave with his flageolet and
- a captain and a caravan-leader and
- towns and cities and
- an hundred thousand dinars and
- Cufa and Anbar and
- twenty chests full of stuffs and twenty store-houses for victuals and
- Gaza and Askalon and from Damietta to Al-Sawan; and
- the palace of Kisra Anushirwan and the kingdom of Solomon and
- from Wadi Nu'uman to the land of Khorasan and Balkh and      Ispahan and
- from India to the Sudan.
Therein also, may Allah prolong the life of our lord the Kazi!, are doublets and cloths and a thousand sharp razors to shave off the Kazi's beard, except he fear my resentment and adjudge the bag to be my bag!"

When the Kazi heard what the rascal and I avouched, he was confounded and said:
"I see you two be none other than two pestilent fellows, godless villains who make sport of Kazis and magistrates and stand not in fear of reproach. Never did tongue tell, nor ear hear, more extraordinary than that which you pretend. By Allah, from China to Shajarat Umm Ghaylan, nor from Fars to Sudan nor from Wadi Nu'uman to Khorasan, was ever heard the like of what you avouch or credited the like of what you affirm. Say, fellows, be this bag a bottomless sea or the Day of Resurrection that shall gather the just and the unjust?"

Then the Kazi bade me to open the bag. So I opened it and behold, there was in it
bread and
a lemon and
cheese and
olives.
So I threw the bag down before the rascal and ganged my gait. 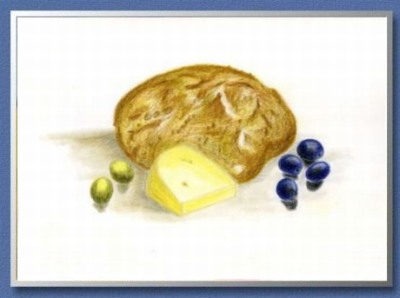 As soon as Ali the Persian finished his story the Caliph Harun al-Rashid started to laugh and his feelings of melancholy and despondency were already long forgotten. But he did not forget to make Ali the Persian a handsome present.

Verily,
the works and words of those gone before us
have become instances and examples
to men of our modern day,
...
that they may peruse
the annals of antique peoples
and all that has betides them,
and be thereby guided and enlightened.
...
This is an extract from the Introduction to the Arabian tales
'A Thousand Nights and A Night'.
A more complete extract can be found in Book of Tales'
welcome page  >>

* Book of Tales' in house writer and poet took the liberty of slight updating the language and making a few minor modifications to make the tale easier to read and interpret.
HomeSouvenir ShopNew ArrivalsRLE ictMailboxEnglish SectionGreeting CardsDutch SectionSitemapDonations