Melanie Reid is tetraplegic after breaking her neck and back
in a riding accident in April 2010.
For some reason, we had left the outside lights on, illuminating the decking outside the kitchen. And that night, very recently, we got to witness strong magic.
Dave was not long back from the pub when, over his shoulder, I saw something big and pale flutter past the French windows. I peered, and peered again, a double take of wonderment.
It was an owl. A huge tawny owl had landed on the patio table.
"Don't move!" I hissed at Dave, interrupting the latest news from the pub. "Turn very slowly!"
We were spellbound. The owl walked around the table on fat, feathery legs and then crouched on the edge, very still, gazing down. It was about ten feet away from us, as big as a medium-sized dog, as fat as
a stuffed toy Minion.
It scanned the ground around the bird table for movement. Waiting, waiting. Then, casually, it floated to the ground, bent and snatched something. Its throat opened and its shoulders heaved. A spectacular reverse vomit. Two giant swallows and the field mouse was gone, still wriggling. Then, after another period of stillness, it caught another. Gulped in two seconds.

"Jesus," said my husband, awestruck. "We're his branch of McDonald's."
"Maybe it's a she," I whispered.
We watched for over an hour, our own personal Life on Earth. The owl flew to perch on the back of a garden chair, even closer to us. At one point, we made a noise and its head swivelled right round to appraise us: yellow X-ray eyes stripping us bare through the window; apparently unafraid.
It seized one more mouse, then drifted languorously off into the night. We kept the lights on and for several successive nights it returned. We were indeed his favourite fast food outlet for a while. I reckon he was male. The garden furniture became stained white with his considerable watery poops, like diluted emulsion paint. Piles of indigestible beaks, fur, guts, mouse skulls and tiny feet appeared on the decking - no lady owl would possibly be so impolite. 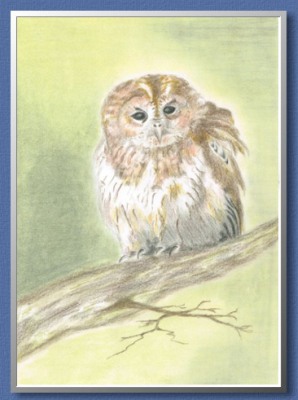 And not for the first time, I realised that the terrible thing that happened to me has brought me, in exchange, great privilege. Had my injury not occurred, there would be no patio, no bird tables, no owl.
I would have been already in bed, oblivious, a spent tornado after
late-night kitchen tidying. Those days of hectic hash-bash, I heard few small voices, noticed no tiny flickers of movement, studied nothing in the stillness but my horse's breathing.
And now? Well, now I'm perversely happy, for I have discovered the one disease that I'm not suffering from. You have no idea how positively smug this makes me feel. In at least one aspect of physical and mental health, as viewed in the round, I am a perfect specimen.
Wise owl says I am not afflicted with Nature Deficit Disorder -
a condition you might think is just a lack of mud, rain, wind, trees and bird song in your life. But it's much more than that: it's mental malnourishment. It's a lack of time and space and peace; an absence of those critical moments when you stop and understand that the world does not revolve around you and your irrelevant frenzy.

Two generations ago we were gathering sticks for kindling and growing potatoes. Another decade or so and NDD will be as much diagnosed in our children as ADHD; all acronyms for divorce from the world without a roof on it. There's an epidemic of it among adults and children who spend their daytime in artificial environments and their evenings in hermetically sealed modern houses.
This is bad enough physically, but mentally it's a catastrophe, because the majority of people spend every waking hour online, in another virtual world. Even if they're watching Life on Earth.
Living is becoming a vicarious occupation.
"Go for a walk and you'll feel better," my mother used to say. I can't do that any more but years of enforced stillness, and my owl, have taught me to watch, listen and think - and realise that my disabled reality is healthier than that of many able-bodied people. My frustration at my lack of physical power is vast, but I no longer have to pay the human costs of alienation from the natural world.