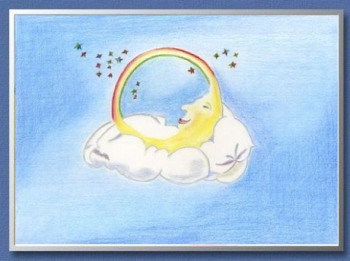 A short tale from the Boloki region in Africa
Retold by Brigitte Franssen; illustrated by Jef Franssen


Motu carefully left his hiding place...
A long, long time ago, in a small village in Africa lived a man called Motu. Motu had a big orchard full of banana trees and the bananas were almost ripe. But when Motu walked through his orchard one morning he saw that whole bunches of bananas had disappeared. The next morning when Motu walked through his orchard again whole bunches of bananas had disappeared. That night Motu hid in the orchard and waited.
After a while he saw a group of Cloudlings come down from Heaven. They landed in his orchard. They picked a few ripe bananas to eat while cutting of whole bunches to take with them. Motu carefully left his hiding place and grabbed one of the Cloudling women. He took her home and married her.

Till that time, Motu or any other of the villagers could make fire.
They ate their meat cold and raw and on cold days they were cold. So, Motu's wife asked the Cloudlings to bring fire the next time they came to visit her and they did. She then taught the villagers how to make a fire to keep them warm and how to cook.
Motu was very happy with his wife. And so were the other villagers. Over time Motu's wife even convinced other Cloudlings to settle in the village.

Then one day she received a closed basket. She put the basket on a shelf in her home and told her husband that he should never open it. If he would, she warned, the Cloudlings would all leave. Motu promised that he wouldn't open the basket. He was a happy man. He lived in a buzzing village, had a lovely wife and was highly respected by his fellow villagers. Still, he often found himself wondering what was in the basket. One day, as his wife was in the orchard, he opened the basket but found nothing inside. With a smile and a little laughter he closed the basket and put it back in its place. 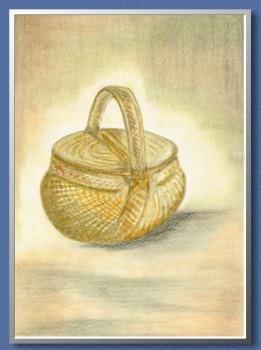 Curiosity killed the cat.
But when Motu's wife returned she asked him why he had opened the basket. Then, as Motu was out hunting, she called all the Cloudlings together and they returned to Cloudland never to be seen again.

And that is how the people on earth learnt to make fire and cook.
~ The End ~

A Little Afterthought for the storyteller
This old African myth suggests that our civilisation had some outside help. It is an idea that is slowly gaining popularity among scholars as they are trying to explain the sudden sharp rises of skills and knowledge followed by slow declines followed again by sudden surges from 7,500 BC onward. Appearances earlier (around 11,000 BC) of domesticated, sophisticated grains like wheat, barley and spelt which unlike wild grasses hold their seed just tight enough to allow harvesting seem to support the idea. Artificial genetic manipulation was not a skill man possessed at that time.

The last sentence of the tale indicates that indeed the tale's main purpose is to tell how our civilisation came about. But the tale has another important message.
Motu promises not to open the basket. He knows what will happen if he does. Yet, in the end his curiosity becomes too strong and he can no longer resist the urge to open the basket. We, humans, are curious and inquisitive creatures. Knowing something is off-limits only increases our curiosity. The Tale of Motu gently reminds us of the fact that curiosity always gets the better of us.
It was after all that same curiosity by which Motu discovered who was taking his bananas in the first place.