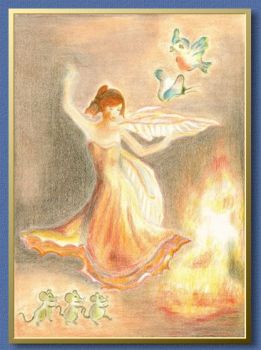 ...and the flaming fire danced with her.
Once upon a time there was a beautiful young girl. She wore the most beautiful, wondrous dress. It was white with beautiful shades of blue, green, brown and grey and richly decorated with butterflies, birds, blossoms, leaves and all kind of animals and plants in all kind of colours and shades. Over her gown she wore a light, blue chiffon robe made of the finest silk.
The girl was full of live. Her heart overflowed with generosity, joy and love. And there was nothing she loved more than dancing around the fire to the heavenly, magical music that came out of the darkness of the night.

In blissful rapture she twirled around the fire. Not to close to get burned and not to far away to get cold. And her beautiful dress shimmered and shone in the light of the fire.
The fire loved to see her dance and catch glimpses of her magical gown and its movement as she swirled round. Afraid of hurting her, he kept his sudden fiery outbursts under control. Instead his flames danced with her to the soft, tender tunes of the heavenly music that came out of the darkness of the night. In tune to the music they danced.
They were in heaven. As she spun round a day passed. As she circled around the fire a year had passed and so many happy a year passed.

Then one day a new little creature made his home in the pleats of her lush and opulent gown. They were only tiny but strong in their own way and could move in all kind of different manners. If they wanted they could even be more beautiful dancers than the girl.
But the tiny, little creatures did not dance. All they did was eat and eat. Like hungry moths they ate away at the girl's beautiful gown. A few heard the heavenly music coming out of the darkness of the night and stopped to listen but most of them just ate and ate and ate.
As the years passed more and more of the little creatures came. Soon they were in every pleat of her dress, on top of every decoration and even in her delicate light-blue silk robe. Lots of the birds, butterflies, flowers and animals disappeared and even the light blue chiffon robe was showing a few holes.

The fire saw what was happening and worried about the girl. He could see how the little creatures were not satisfied with the robe and gown and were now digging into her flesh, taking large lumps out. He let his flames reach a little higher to give her a bit more warmth. He fired warning-shots at the little creatures. But they just covered their ears and kept eating. He targeted them with his flames but even that did not stop them. And the fire could not raise his flames any higher afraid of hurting the girl.

The beautiful girl saw her beautiful dress and robe being eaten away. She felt the pain as the little creatures ate her flesh. Tears streamed down her cheek on her robe and gown. She could have drowned them in her tears. She could simply have swept them away but she was too kind, too loving, too generous for that.

The girl was cold, wounded and naked. Her beautiful dress and gown were gone forever. But her inner beauty shone stronger than ever before. And the flaming fire danced with her. He warmed her and comforted her. Soon her wounds started to heal and a new dress started to appear and on it all kind of animals and flowers in all kind of colours and shades. There were even a few tiny little creatures there, tiny but strong, who could do anything they wanted to. But all they wanted was to dance around the fire on a beautiful gown to the music that comes out of the darkness of the night.
~ The End ~

This is the day the cuckoo likes and so do I.
When the hills fall down in different shapes and the swallows fly
to a hidden beach where boats don't go
and wild abandonment fills my soul
and I hear the squealing as the seagulls way of home they go
and So Do I.
So Do I.

This is the day the fisherman likes and so do I.
When the rain puts a shine on the chestnut spikes
hear the curlews cry.
The nightingale sings her best,
we'll drink a pint in Hamilton's Rest.
and the girl I love wore a muslin dress,
and the fishermen dream of the sun in the west
and So Do I.

And So Do I.
Now I can see. Since the girl that I love dearly
has cast her loving spell on me.

I'll cross the Seven Oceans
forever more I'll wander
'til she has cast her loving spell on me.