where secrets & treasures are kept safe

Cease hindering the DON'T
that exists in you by chasing incomprehensible matters. i
<<   Go Back


For, it is as the old Druid said
when he warned Ceredig Cwmteifi
who was on an important mission for his queen:

"Common with the over-eager after knowledge
will be their coming by deception." ii

But despite the warning, Ceredig Cwmteifi couldn't help himself when Knowledge showed herself in the distance like an easy prey. He blindly chased after her, completely forgetting his queen and his task.
His reckless hunt finished, however, rather abrupt when he suddenly ended up at the bottom of a well.
Blinded by his over-eagerness and misled by slight glimpses of Knowledge Ceredig fell into this dark and deep pitfall from which it is almost impossible to get out.
So, be warned before you chase after Knowledge. There are many pitfalls between you and Her. The poor souls trapped in them are called the Deceived. And unfortunately, Ceredig Cwmteifi wasn't the first to fall in, nor will he be the last. 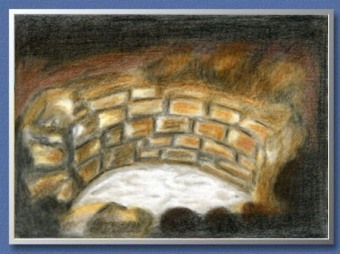