A short story by Brigitte Franssen
Illustrated by Jef Franssen


I woke up with an uneasy feeling. I had dreamt I was driving a car way too fast, almost not making the corners, almost losing control but unable to slow down or use the brakes. I had dreamt this dream many times before and it always left me feeling powerless, not in control and exhausted.
This was not a great way to start the day. I looked at the alarm clock. "Shoot, that late already." I had to get up quickly. There were so many things to do today. So little time, so many things to do!
That whole day I rushed from one thing to the other, already thinking about the next thing to do while still working on the other. And before I knew it, it was time to go to bed again. But I still had a book to read. A dear friend had given it to me for my birthday and I felt guilty for not having read it yet.
The book was bigger than normal and at the front it read, in big golden letters, 'A timeless keepsake for you to treasure'. I opened the book and read: "My Nursery Collection". Oh, this was nice; a book with all the old nursery rhymes. I flipped through the pages and my eye caught an old and well-known nursery rhyme. 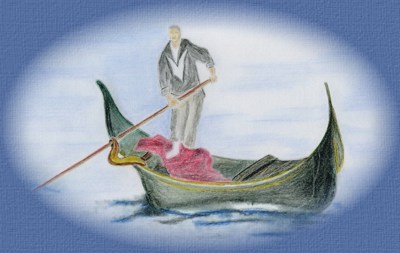 Could this be true? Could I just go with the flow? Could, would, everything still be all right if I took it a bit easier? Was this what my dreams were telling me as well? Was I paddling too hard? Was I making waves in otherwise calm waters?
I decided that for a day I would try to take things easy and see where that would lead me. I tried but still found myself rushing and pushing. I tried a second day and a third. The days became weeks and the weeks became months. The funny thing was that the better I succeeded in going with the flow, the more things got done. And the less I pushed and paddled, the better things and life in general became.
So to me, life is indeed like a dream. By changing my own mindset, so did my life. Think about it. Maybe there is nothing in life that is out of your control and maybe there is nothing that can really harm you, except yourself. Just like in dreams.

All I know is that this morning I woke up with those warm and rosy feelings left after dancing under a moonlight sky in the arms of a handsome and loving man. But that was not a dream, at all at all! ...or was it?
A nursery rhyme
so short and fine
tells a truth
only known to the divine;

Life is but a dream
in a boat on a stream.

There is no proof
but it is the truth.