'A single rose can be my garden,
a single friend, my world.'
Leo Buscaglia


"Gentlemen of the jury:
The best friend a man has in this world may turn against him and become his enemy.
His son or daughter that he has reared with loving care may prove ungrateful.
Those who are nearest and dearest to us, those whom we trust with our happiness and our good name, may become traitors to their faith.
The money a man has, he may lose. It flies away from him, perhaps when he needs it the most.
A man's reputation may be sacrificed in a moment of ill-considered action.
The people who are prone to fall on their knees to do us honour when success is with us may be the first to throw the stone of malice when failure settles its cloud upon our heads.
The one absolutely unselfish friend that a man can have in this selfish world,
the one that never deserts him
and the one that never proves ungrateful or treacherous is..."
Continued further below


Day after day, the whole day through
wherever my road inclined
four-feet said: "I am coming with you!"
and trotted along behind.
Rudyard Kipling
(famous English Writer, 1865-1936)


About 10,000 years ago man started to give
their dogs formal burials.
But the partnership between dogs and man
goes back a lot further.
Thanks to a study by Robert K. Wayne into
the DNA variability in dogs we know that
at a genetic level, dogs although maybe
looking completely different, are basically
wolves and that dogs had to have diverged
from wolves as a separate population about
135,000 years ago i. This seems to indicate
that dogs and back then wolves have been
together with man for at least 135,000 years!

An Australian group of anthropologists even argues that wolves and later dogs gave early human a huge survival advantage by serving as guards and lookouts. And that this partnership was probably a big reason why early man survived and Neanderthals didn't. Neanderthals didn't have dogs ii.

Early Man, our ancestors possessed the knowledge and understanding that partnerships with animals whether it is a dog, a horse or a cat are crucial to our survival and well-being. But in our current day and age we, the great-great- grand-children often prefer to forget this, not realizing that if we forget we also loose the understanding which in turn leads to poverty and stupidity; thinking that we don't need to build partnerships but that we, as the more
advanced and powerful species, can
take whatever we want.

Had it not been for a few burglary
attempts a few years ago and the lack
of action by the police who is stationed
only thirty meters from my house, I
myself would not have been aware of
this. But that situation caused me to
get a dog and now I cannot thank the
heavens enough for sending these few
burglars along my path.
Here is my ode to my bitch Bo-Bo.


The walks keep me fit.
Playtime, which is your favourite
awakes the child in me.
Your constant company
sets me free.
And then you reward me
with your undying loyalty
showing through in your eyes.
It stops my lonely cries
and my heart flies
through heavenly skies... 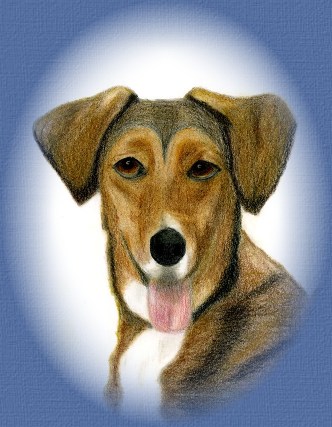 A dog is a man's best friend

Old & well-known phrase
Continued from above

"Gentlemen of the jury,
a man's dog stand by him in prosperity and poverty, in health and sickness.
He will sleep on the cold ground, where the wintry winds blow, and the snow drives fiercely, if only he can be near his master's side.
He will kiss the hand that has no food to offer;
he will lick the wounds and sores that come in encounter with the roughness of the world.
He guards the sleep of the pauper master as if he were a prince.
When all other friends desert, he remains.
When riches take wings and reputation falls to pieces, he is as constant in his love as the sun in its journey through the heavens.

If fortune drives the master forth an outcast in the world,
friendless and homeless,
the faithful dog asks no higher privilege than that of accompanying him to guard against danger, to fight against his enemies, and when the last scene of all comes, and death takes the master in its embrace and his body is laid away in the cold ground, no matter if all other friends pursue their way, there by his graveside will the noble dog be found, his head between his paws, his eyes sad but open in alert watchfulness, faithful and true even to death. 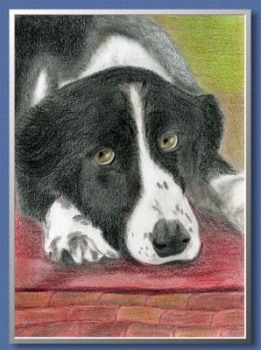 Eulogy to a Dog
By the lawyer George Graham Vest, 1870

<<  More Nourishing Recipes for the Soul