When a prisoner in the English household of the Duchess of Suffolk
- somewhere in the 1430's - the great French poet Charles duc d'OrlÚon wrote in French of his 'trŔs doulce ValentinÚe'
and in English that
'Als wele is [with] him this day that hath him kaught a Valentyne
that loveth him'.
Around 1600 an English playwright called William Shakespeare wrote his longest play 'Hamlet'. In Act 4, Scene 5 Ophelia sings the following words:
To-morrow is Saint Valentine's day.
All in the morning betime,
and I a maid at your window,
to be your Valentine...
Two hundred years later and the first printed Valentine cards were produced in England.
The Birmingham Library collection holds a printed Valentine's card dated 1797.
However, French printers followed swiftly and brightly coloured Valentines soon became a staple of the Imagerie d' ╔pinal. America did not catch on until the 1840's. 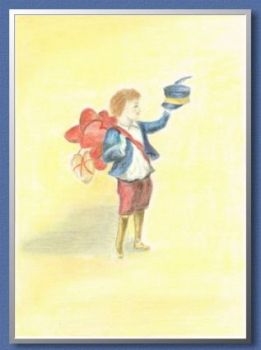 
From around 1860 EugŔne Rimmel, a French-born British perfumer, was the leading name in perfumed sachet Valentine production. His exquisite designs featured hidden messages printed on scented silk pads. And since then simple posies and fairings have been giving way to long-stemmed red roses, divine chocolates, jewels, perfumes and even lingerie. 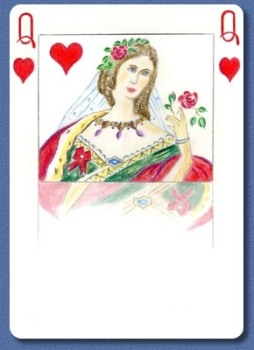 PREVIOUSLY:
The Feast of Brighid  (2 February)  >>