On the Origin of Evil

There is a land that always was, and always will be. It is not here and yet it is. In this land there is no darkness, not even the slightest shade. Light fills its whole world, from top to bottom, from one far corner to the next.
One of the lights that illuminates this world is Truth. Another light is Faith. And then there is Wisdom. She is also called Sophia and she is bright, very bright. Yet despite all her brightness Sophia longed to do something silly. And so, despite herself she went on to do something without consulting her wisdom and did something really silly. Out of this silliness Foolishness was born. She named him Saklas, which means Fool. Sometimes she also called him Samaul which means blind god. For Saklas was in the dark; unknowing and unable to see. He was the darkness. 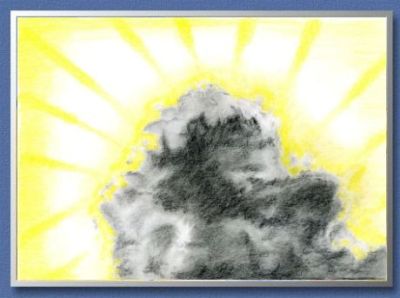 His darkness created a place for the Lady of the Lies to stay and dwell. In the Land of Light there was no place for her. Truth
would shed her light on her and in doing so dissolve her. But in the dark a lie wasn't detected or seen. Here, she could safely wander around.
Under the cover of the Darkness she wandered over to Saklas and whispered in his ear, "You are the greatest. Look around you, do you see anybody greater than you? You are marvellous, better and worthier than anybody else!" And Saklas did not see that these were all lies. He believed every single word of it. And he started to admire and love himself in his usual blind way. He was the greatest! Not seeing who and what he actually was, he absolutely adored himself. From then on, he would be called Saklas the Smug.

Convinced he was the greatest Saklas the Smug became arrogant. And the Arrogant Saklas the Smug said,
"I am God and I alone am God.
There is no other besides me and I need no other."
He had hardly finished saying those words when from the Land of Light a voice spoke to him,
"You err, Saklas!"
It was his mother Sophia who spoke to him as she stretched her brightly shining finger out to him.
Saklas couldn't see who spoke those words but with the light emitted from his mother's finger he did see something. This something looked bigger and greater than him and this he did not like at all. He was the greatest! And the arrogant Saklas the Smug turned away from the
light that shone in the darkness, growing envious of the voice and of that which looked bigger and greater than him till he gave birth to Envy.
After Envy he would go on to arouse many more evil forces, big and small. More can be read about them in the chapter 'The Forces of Darkness'.

The Athenian philosopher Plato once said that the Smug is the source of all Evil but in a land not that far from here, called France, they say it is the Lady of the Lies. After all, it was her lie of how great he was that turned Saklas into a Smug.


The Truth sometimes hurts,
but it is the Lie and what is not said
that is the root cause of all evil.


The Forces of Darkness  >>
Continue reading