It was early in the morning. Braveheart had just woken up. It was raining outside. Not good, Braveheart thought. Today, he had to travel to town to arrange for a letter of the King granting him free passage through the land and the land of their allies.

The town was buzzing. It had stopped raining hours ago, even before Braveheart had set out on his journey, and people of all kinds filled the streets. Braveheart entered the King's court only to be told he had to wait. He grumbled at the thought and protested loudly as he saw another knight being allowed in immediately.

"The world is too big for good luck", someone said. Braveheart turned around and saw a small, slim build man with dark skin and dark hair. He too was waiting to see the king. His name was Shahram, which means Quiet King. He came from a land far, far away, to the East. Together they waited. In each other's company time went by unnoticed and they both got to see the king after what seemed only a short time. 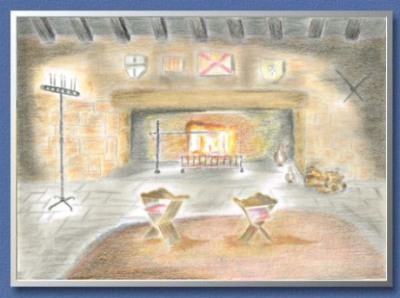 That night, back in his own castle, Braveheart remembered what Shahram had said and went to see his sage. The sage was sitting in front of the open fire in the big hall. Braveheart sat down in the chair next to him. "Is the world too big for good luck?" he asked.
The sage smiled. "Good luck comes in many shapes and forms. Most of the time people don't recognise it. Even if it is staring them right in the face they think it's their bad luck. Tell me Braveheart, was your day indeed so bad as you make it out to be? Did it rain during your travels? Did the king refuse to see you? Was boredom your companion or did you meet an interesting and inspiring man? If the world were twice as big, even if it were ten times bigger, there would still be enough good luck to go around. But good luck leaves when...." The sage paused and then said: "It stays away when..." and then fell silent again.
Braveheart knew the sage well enough not to push him. Slowly the sage got up. "Goodnight Braveheart." "Tell me Sage, pleaded Braveheart softly, what keeps Good Luck away?

The sage turned around. Braveheart saw love in his eyes but also pain. "I would like to tell you, Braveheart, I really, really do. But that would bring bad luck."
~ The End ~