A doubtful affair
As she heard for the second time that day the song 'Dem Bones' on the radio the words of her Pilates teacher sprang to mind: 'keep the hip-rib connection'.

Without the all-important hip-rib connection her posture was poor, her strength even poorer and too much strain was put on her poor back, neck and shoulders.

Like the song says: everything is connected and should be connected but can just as easily be disconnected.
She wondered what made her lose her connectedness? Was it Suffering, Overeagerness or plain Fear?

"Do not be afraid for I am with you!"

Yes, she knew! And she didn't know, couldn't believe, couldn't trust a stranger she could not see and whose name she did not know. But she knew all that didn't really matter. What did matter was that the one she didn't trust... was she.

There are rivers made of Doubt. According to Norse Myth the river Ifling (which means Doubt) is one of the barriers defending Walhalla, the legendary home of the chosen ones.

"Was she a warrior who could cross that river of doubt that separated her from herself, without becoming cocky?" she wondered. She doubted. 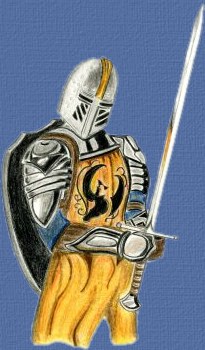