The Fountain of Youth

Tales from a Greenhorn

I used to think that just as the summer comes and goes, youth comes and goes but I have changed my mind. I have seen many young people who are young in years but as sluggish, stiff, deaf and blind as any old man. And I have seen old people who are flexible and vigorous in their approach, with ears that listened and heard and eyes that saw better than any young person's.
We don't stop playing because we grow old;
we grow old because we stop playing.
George Bernard Shaw (1856 -1950)
Irish writer
You can be an old man but still get up at dawn to see the sun rise. You can be an old woman and still be stopped in your tracks by birdsong. You can be old but still bent over backward to be good to yourself and others.
For me the big question is not where to find the water of eternal youth. The question is: "Do I really want to drink it?"

Or do I want to live life whatever it brings and discover the world around me and myself, learning while playing, loving and hating, laughing and crying? Would I like that? Do I want to drink the water of the fountain of eternal youth?
It is your zest for life
with all its ups and downs that keeps you young. 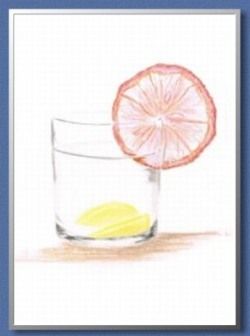 After all, with a little bit of orange or lemon zest a plain glass of water
not only tastes better, it looks so much better too!


NEWSPAPER CLIPPING
from The Week, 20 January 2018
An 80-year-old great-grandmother has become the UK's oldest ballet dancer. Barbara Peters, from Halifax, took her first ballet exam at the age of nine and went on to study at the prestigious Royal Academy of Dance in London - but then missed her final test because she had broken her arm. Later, she opened a dance school in Huddersfield, where she taught thousands of children, but it was only in 2015 that
she began studying dance again herself. Last month, she took the academy's highest test (grade seven) and, on the eve of her 80th birthday, learnt that she had passed. "It was the best gift I received," she said.

All illustrations by Jef Franssen