Read an article in the newspaper about a month ago. A guy in America called Jonah Lehrer (which is the German word for teacher) has published a book titled 'Imagine: How Creativity Works' that is rooted in scientific research.
In the article it said (Sunday Times of 18th March 2012):
"In Imagine, Lehrer draws on research by neuroscientists and psychologists, who are conducting controlled experiments on creativity, to work out how we write songs, paint pictures or solve problems. ... They have established that the left side of the brain is the logical side. It solves problems in a straightforward, rationale way. The right side, usually dormant, flashes into life only if you are stumped. ... Right-brain thinking seems to dominate creative
thought. ...
At the same time, researchers into brain waves have observed so-called alpha-waves, produced when the brain is relaxed but awake. In a process that has yet to be fully understood, these suddenly flood the right brain roughly eight seconds before an idea pops to mind.
.... 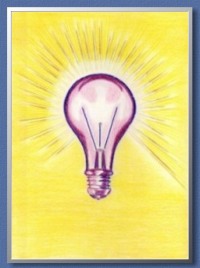 Lehrer identifies various ways to spark your own inner muse.
They include
taking regular 15-minute breaks to walk around or lie down
(the process of relaxing fires up alpha waves);
getting frustrated (forces you to switch from left to right brain);....
and the colour blue
(working in a blue room tricks the brain into releasing alpha waves)."
I wonder if it is a coincidence that my kitchen walls are a soft shade of blue and that the walls in my living room are covered in blue wallpaper. My landlord did that just before I moved in. I would never, ever have picked blue for a living room or kitchen. And it actually took me quite a bit of time to get used to it. Little did I know!
From now on, I will think of the colour blue as the colour of Inspiration & Creativity. 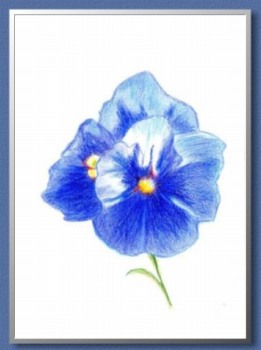