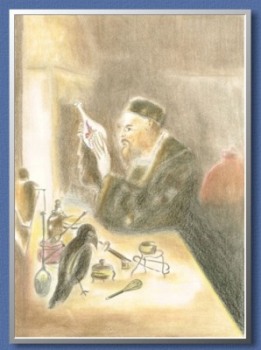 After another failed experiment he realised...
They say that three and a half Olympic swimming pools could hold all the gold ever mined in the world. That doesn't seem like a lot and one wonders if it is true.
Gold is, however, definitely perceived as a scarce and rare metal, which might explain the hunger for it. All through the ages people have done all kind of things to get their hands on gold and one of those people is the alchemist.

The alchemist tries to get his hands on gold not by digging or sieving but through the transmutation of matter. In his laboratory he carries out many experiments all aimed at creating gold.

After another failed experiment the alchemist realised that oil does not mix with water or any other liquid. He kept on experimenting and discovered that with a little lecithin, the one you find in golden yellow egg yolks, the oil can be bound to liquid, once the lecithin in the cell walls of egg yolks are broken down.

He then took a whisk, 2 golden yellow egg yolks, 2 teaspoons of vinegar and a generous 225 ml of oil pressed from golden yellow rapeseeds. With the whisk in the one hand and the oil in the other he dripped the oil onto the egg yolks and vinegar, drop by drop, whisking at the same time. Within a minute he noticed that the mixture was beginning to thicken. He slowly kept on adding the oil. Five minutes later he had a smooth, golden emulsion that transformed any food whether that be meat, fish, vegetables, or simple plain bread into a heavenly dish.

The Alchemist had found his gold. 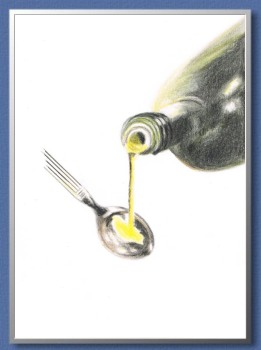 Over time the alchemist discovered that it is in particular the rapeseed oil that gives the mayonnaise its golden yellow colour. Sunflower oil will give a much paler emulsion while olive oil has too strong a taste to turn into gold.
Learning from his mistakes he also soon came to know how important it is he stayed patient once the mixture starts to thicken.
The egg yolks can only absorb the oil at a certain rate. If he went to quickly it all suddenly curdled, becoming a quite thin fluid instead of gold.

One of his colleagues, called René Redzepi, grasped that the lecithin in the cell walls of an egg yolk, which, once broken down, bind the oil to liquid were also present in bivalves. He blitzed 6 oysters thoroughly in his blender and then added the oil drop by drop while stirring. As with the egg mayonnaise the result was viscous. But was it gold?