A short & familiar old Fable with a twist


There are stories that are old and there are stories that are even older. Scrapefoot is one of these old, old stories. It became very popular as a nursery tale after Robert Southey in 1837 inserted the story in his book 'The Doctor'. During the next 75 years the chief character would change from an ill-tempered crone to a radiant maiden called Goldilocks. 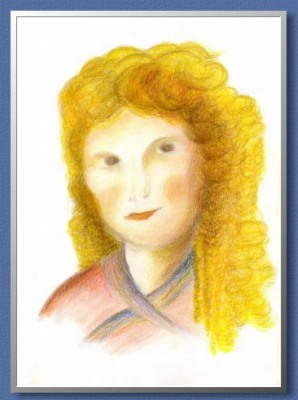 But long before she had become an ill-tempered crone or a vixen, as these women are often called, she was actually a vixen.
She was a fox called Scrapefoot. i And the story of Scrapefoot is not a nursery tale at all, at all! It is a story, a tale from the golden olden days that has the magical power to entertain both young and old and at the same time tell us a little bit about ourselves and the world we live in.
The Oxford dictionary gives the following archaic definition of the word scrape: an obsequious bow in which one foot is drawn backwards along the ground. So now, let me tell you the story of 'Scrapefoot and the Three Bears' as it once might have been told long before it was ever written down.
`

Retold by Brigitte Franssen and illustrated by Jef Franssen
Once upon a time in a land not so far away lay the most beautiful forest with mighty old trees, mosses in all shades of green, clear babbling streams and light open spaces filled with delicate sweet smelling flowers.
In the middle of this wonderful wood stood the Castle of the Three Bears. They were the masters of the forest. There was Big Bear who ruled the forest with the fair and square hand of survival of the fittest. There was Middling Bear who ruled with the driving force of hunger. And last but definitely not least, there was Little Bear who ruled with the gentle touch of intuition. 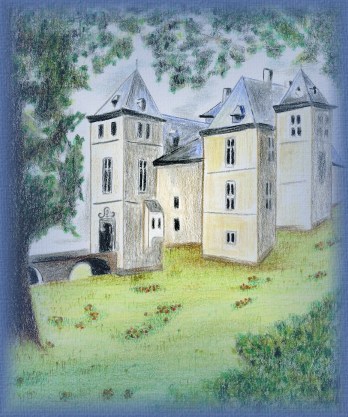 One day the Three Bears decided that they wanted to leave their beautiful forest. They had heard of places, even more beautiful and where life was so much better and easier than in their forest. They packed only the smallest of smallest suitcase and left their castle and wonderful wood behind.
They had barely left when an old clever and cunning fox approached their empty castle. The old fox was known for the fact that she would rather beg for anything and bow for anyone than do an honest day of work. It was her typical bow whereby her foot would scrape heavily backwards over the floor that earned her the name Scrapefoot. 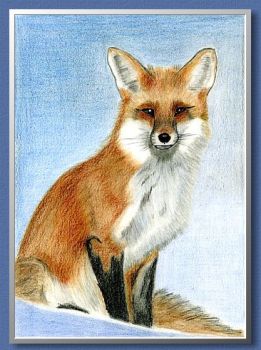 Carefully checking if the Three Bears were indeed gone Scrapefoot entered the Castle. She found herself in a big hall. At the end of the hall stood three thrones, one for each bear. Old Scrapefoot climbed onto the throne of Big Bear but it was too hard for her and made her bones ache. She jumped down and got onto the throne of Middling Bear. This was too soft for her and she could not make herself comfortable. So she went to the throne of Little Bear. Although it was the smallest of the three thrones, it was by far the most beautiful and powerful one. The seat was covered with flowers in every colour of the rainbow, tightly and skillfully woven together in one harmonious design. Scrapefoot, who like any fox could not see colours very well, did not see this. She only saw three flowers in three colours.
As Scrapefoot sat down on Little Bear's throne all the other flowers and colours started to fade away till only the three Scrapefoot could see, were left. These were the mating-, the mother- and the killer-instinct.

When the throne lost most of its flowers and colours the forest did as well. And other things were changing too.
It were no longer the fittest who survived but the canny, the shrewd and the guile ones. And the middling drive of an empty stomach was replaced by the unseen force of the wind from whatever direction it was blowing. Sometimes it was so slack that hardly anything moved. Other times it turned into a voracious tornado destroying everything in its way.
Old clever and cunning Scrapefoot was now the new mistress over the entire forest. But the bottom of her throne was only being held together by the three remaining flowers and without any warning it came out and down came Scrapefoot.

She said a wicked word or two and then decided to see what else there was in the castle. Soon she found the dining room. In it stood a huge heavy but beautifully carved table with three plates on it.
On the first one lay a big smoked salmon, known to the Three Bears and to the people of Eire as the salmon of knowledge. Scrapefoot took the plate but the strong and weird smell of the salmon made her quickly push the plate as far away as she could.
On the second plate lay a lovely cake, dripping with honey, known to the Three Bears and the Gods as the nectar of wisdom. A bit cautious after her first experience Scrapefoot very, very carefully took the plate. But as soon as she smelled the richness and sweetness of the honey, she pushed the plate even further away than the first one.
On the third plate stood a little saucer filled with milk, known to the Three Bears and any mother as the food for the little ones, who are still too small to eat anything else. Scrapefoot carefully smelled the milk but this did not smell too strong, too weird, too rich or too sweet. She took a little lick and liked it so much that she went on drinking till it was all gone.

Scrapefoot said a wicked word or two because she would have liked some more milk but as there was none left, she continued her explorations of the castle.
She entered the bedroom. In it stood three beds, one for each bear.
Scrapefoot started to climb into the bed of Big Bear. When she was halfway up she decided it was too much of a climb and climbed into the bed of Middling Bear instead. But Scrapefoot could not get comfortable in Middling Bear's bed. She wished she had more pillows for support and an extra blanket in case it got cold.
So she went to the bed of Little Bear. This was like lying on a bed of roses and soon the old fox fell asleep, completely forgetting that she was lying in someone else's bed. 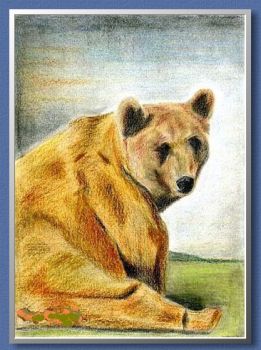 Meanwhile the Three Bears had become very unhappy. Their new place was not at all what they had thought it would be. Life was neither better nor easier. They longed so much for their old forest and their beautiful castle that they took their suitcases filled with the experience of what not to do and went back home.
When they got to the castle they immediately sensed that things were amiss. They entered the great hall and the big strong voice of Big Bear rolled like a thunder over the forest.
"Who has been sitting on my throne?" he roared.
Immediately followed by the middling voice of Middling Bear which had not been heard in the forest for so long.
"Who has been sitting on my throne?" said Middling Bear.
And finally Little Bear whose voice is like the morning dew that awakes and freshens the flowers spoke.
"Who has been sitting on my throne and has sat the bottom out of it?" said Little Bear.

They went on to the dining room and again the voice of Big Bear rolled like lightning and thunder over the forest.
"Who has been pushing the salmon of knowledge so far out of reach?" he growled.
And the once so regularly heard voice of Middling Bear could be heard again as Middling Bear said:
"Who has been pushing the cake with the honey of wisdom even further out of reach than the salmon of knowledge?"
Then Little Bear with a soft and worried voice said:
"Who has been drinking all the milk for the little ones and has drunk it all up?"

The Three Bears continued their search and went to the bedroom.
"Who has been trying to climb into my bed?" bellowed Big Bear.
"Who has been lying in my bed?" said Middling Bear.
And Little Bear said:
"Who has been lying and sleeping in my bed?
Look, here she is!"
Scrapefoot was still asleep. She was so fast asleep that the thundering voice of Big Bear was no more to her than a soft whisper of the wind. While the Three Bears wondered what they should do with her, Scrapefoot slept like a baby. They decided that they would burn her with the burning flames of a true heart's desire. But burn Scrapefoot did not. They tried to drown her in the rivers filled with the tears of sorrow. But drown Scrapefoot did not.
Then, the Three Bears took Scrapefoot, who was still sleeping like a baby, to the window. They swung her backwards and forwards, backwards and forwards and out of the window. The Three Bears had thrown Scrapefoot so far out of the window that they could not see her anymore and they wondered if they would ever see her again.

Scrapefoot had landed with such a bang that she had finally woken up and she counted her lucky stars that not one bone in her old body was broken. She looked around the place where she had landed and smelled the air. Was that not the smoke of a little fire and the tempting smell of a soup cooking? Through the trees she could vaguely see a little wooden house with smoke rising from the chimney. Scrapefoot licked her beard, wagged her tail and went on her way.
There were still plenty of places for her to see and go to but she would never, ever, go near the Castle of the Three Bears again.