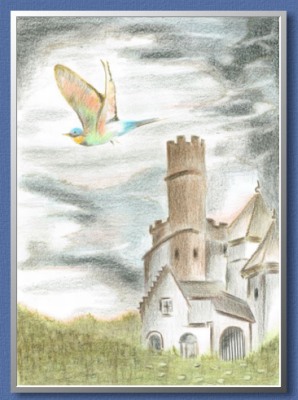 There is more between heaven and earth than meets the eye!

But no one descended to the Traveller;
no head from the leaf-fringed sill
leaned over and looked into his grey eyes,
where he stood perplexed and still.

But only a host of phantom listeners
that dwelt in the lone house then
stood listening in the quiet of the moonlight
to that voice from the world of men:
stood thronging the faint moonbeams on the dark stair,
that goes down to the empty hall,
hearkening in an air stirred and shaken
by the lonely Traveller's call.

And he felt in his heart their strangeness,
their stillness answering his cry,
while his horse moved, cropping the dark turf,
'neath the starred and leafy sky;
for he suddenly smote on the door, even
louder, and lifted his head:
'Tell them I came, and no one answered,
That I kept my word,' he said.

Never the least stir made the listeners,
though every word he spake
fell echoing through the shadowiness of the still house
from the one man left awake:
Ay, they heard his foot upon the stirrup,
and the sound of iron on stone,
and how the silence surged softly backward,
when the plunging hoofs were gone.


The above poem is by Walter de la Mare. De la Mare was born in 1873 in London and died there in 1956. He is considered one of modern literature's chief exemplars of romantic imagination.

Although is it really just imagination?
Who has not felt the special atmosphere at a deserted house or the quiet stillness of a forgotten place? Is Walter de la Mare here not merely pointing out that there is more between heaven and earth than the naked eye can see or the ear can hear? De la Mare's traveller feels it. He feels how their stillness answers his cry (see 4th paragraph of the poem).

De la Mare definitely can see beauty where maybe others might struggle. Even in a scene where a lone traveller knocks on a lone house De la Mare sees the magical beauty of it all.
But De la Mare also makes a small reference to the traveller being the only one left awake (see last paragraph). Is this a reference to the Tale of Sleeping Beauty, as we here at Book of Tales would like to believe? After Sleeping Beauty pricked her finger, but before the trees, brambles and thorns shielded her castle from the outside world,
was there this moment that a traveller knocked on the door?
But who knows what the tale of Sleeping Beauty is trying to tell us? Who can see its symbolic signs and hear its hidden messages?
Maybe Walter de la Mare did.

<<   Other entertaining stories to read online 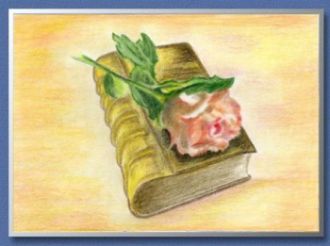