The Hermit and the She-Wolf

A Short Story from The Desert Fathers 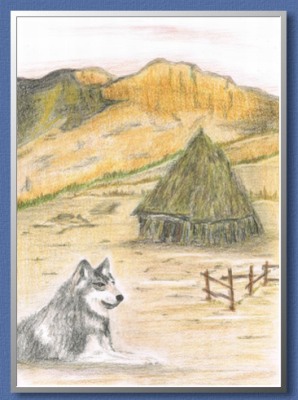 Once upon a time a hermit lived in the desert in a poor hut, where only one person could enter at a time. Always at mealtime a she-wolf would come and wait outside until the hermit gave her whatever bread had been left over from his poor meal. Then she would lick his hand, and as if her task was done, would go away.
But it once so happened that the hermit had gone with a traveler passing by, to put him on his way. He was a long time away - not getting home until nightfall. Meantime the beast had come at the usual meal hour. She felt her friend was not there and went into the empty hut, still hopeful to find him.
A palm-basket with five loaves was hanging within her reach. Instinctively she jumped at it, seized a loaf, devoured it, and then
made off. When the hermit came back, he saw his basket torn and breadcrumbs on the floor. He had little doubt as to who the culprit was.

Days went by and the she-wolf did not come. She was too conscious of her bold act to come and pretend innocence. The hermit took it sorely to heart that he had lost her company. He truly missed her.
At last when the seventh day had gone by, his prayers were answered. There she was, as he sat at his meal. But she stayed at quite a distance from the hut, didn't dare to come nearer. The hermit called to her and went up to her. With a caressing hand he stroked her sad and sorry head and then he gave her two loaves.
And she, forgiveness won and her grieving ended, resumed her daily task of keeping him company at mealtime.

Consider, I pray you, the power with which a hermit becomes forthcoming and sociable and a brute beast regretful and gentle.