of the Tale of The Frog and the Snail 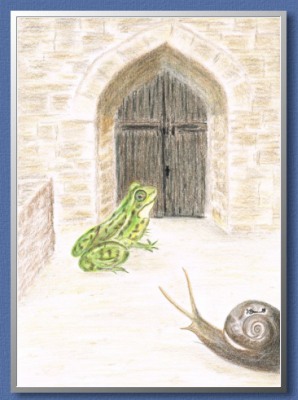 It is no use hopping over to the kingdom of Heerlijkheden and then waiting at the gates to be opened. It is the journey itself that will provide you with the keys to its gates (or the capability to crawl under them). So you better take it slow.

Did you know that piano virtuosi often practice in slow motion? Practicing in slow motion gives them three advantages:
1. it helps to evaluate the difficulty of a piece, especially an unfamiliar one;
2. it helps to avoid building bad habits and;
3. there is no better way to assess the worth of a piece than by examining it under a microscope.

And then, as the piece slowly reveals its worth and as they get closer and closer to play it at its intended speed. Then, they can experience a heightened feeling of awareness, a feeling as if their movements are being pulled by outside forces and a deep visceral pleasure that transports them directly into the kingdom of Heerlijkheden.