Just after the winter solstice the earth reaches that point in her orbit around the sun that is the closest to the Sun. This happens around the fourth of January and after that the distance between them will grow again. That is why that day for so many people in the Northern Forests marks the end of the Holiday Season.
The event is called Perihelion. It stems from the Greek word 'peri', meaning near, and helios, the Greek word for the Sun.

At Perihelion the earth is about 147.5 million km away from the sun. According to astronomers this barely differs from the maximum distance of 152.6 million km she reaches in July, which they call Aphelion >>
The little difference between the distances is due to the fact that the slight elliptical path of the earth around the sun is so close to being perfectly circular. 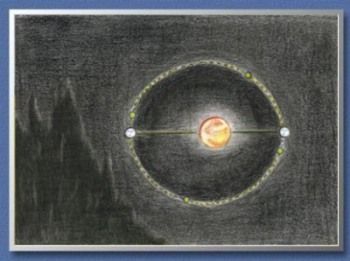 Although the differences in distances are not that big there are measurable differences in solar heating. Averaged over the globe the sunlight falling on the Earth in January is about 7% more intense than it is in July.
For the Northern half of the planet there will, however, be no relief from the cold. Winter will continue unabated in the Northern Forests.

Seasonal weather patterns are shaped primarily by the 23.5 degree tilt of the Earth's spin axis. During northern winter the north pole is tilted away from the Sun. (See also Midwinter >>)
Days are short and that makes it cold.
But isn't it a nice coincidence that just as the inhabitants of the Northern Forests need warmth and like to snuggle up in front of the fire Mother Earth helps them a little by snuggling up in front of the biggest fire there is: the Sun. 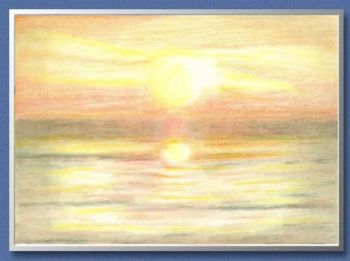 The obvious answer is: exactly the same.
Consider this the next time you think you are right because it looks that way to you.

Other Tales from the Northern Forests  >>