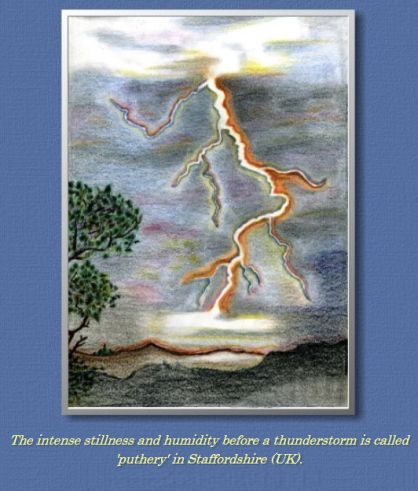 Not dense enough to call mist, let alone fog, March's damp adds weight to the morning's mood and to each intake of breath the cold flavour of bare earth and dead leaves.
The oak leaves, which were frosted copper last month, have almost finished their journey from leaf mulch to soil. The ivy leaves in the hedge seem to droop as if they have all been licked downwards, and the garden robin hugs its shadow. There is no division between the grey of the sky and land, and no horizon.

The month of March is named after the Roman God of War, Mars and marked till 1752 March the beginning of the year. It is only from that year on that the year begins on the first of January.
The Old English name for the month of March was 'hlydmonath', the noisy month or 'hrethmonath' the rough month.

Both the Roman and Old English names refer to March as a harsh month. It is not unlikely they were both trying to reflect the fact that 'all beginnings are hard', also applies to the start of a new year.
The Celts called this month 'Cutios' meaning Windy Time.
Daffodils,
that come before the swallow dares,
and take the Winds of March with beauty
(William Shakespeare, the Winter's Tale, act 4)

Beside the daffodils in the verges the fields are still bare: a good time to observe the hares of the Northern Forests.
On paper a hare could be easily dismissed as a big rabbit but they're different beasts altogether. It's all in the way they move. A hare possesses powerful hind legs; a pair of pistons that can send them rocketing towards the horizon at over 40mph.
Although generally nocturnal and shy in nature, hares change their behaviour in spring, when they can be seen in broad daylight and amorous male hares approach females in the hope of finding a mate. That is maybe why they have always been closely associated to Spring, springtime fertility rituals and the goddess Eostre and still play a role in our Easter celebrations albeit watered down, chocolate covered and transformed in the Easter Bunny.

Chatting up a female is a risky business though for the male hare. Potential sexual partners can suddenly transform into sparring partners when uninterested female hares rise up and strike a blow by punching the males in the face. The frenzied 'boxing matches' that ensue are such a striking spectacle that they have given us the phrase:
'as mad as a March hare'.

The phrase 'As Mad as a March Hare' is even mentioned in tales and stories:
"The March Hare... as this is May,
it won't be raving mad- at least not so as it was in March."
('Alice's Adventures in Wonderland')
Yet who are we to be questioning the hare's mental stability? We used to believe that sprinting hares can start fires and that witches could transform into hares and only be killed with silver bullets. In line with such wise beliefs a special day of the year was dedicated to our 'wisdom':