Before dawn a silent sky waits for the pale winter sun to slowly rise between the naked trees and shimmer on laces of frost.

During the month of January various winterly figures come and visit the Northern Forests. 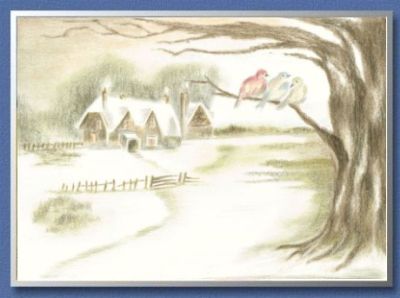 There is of course Lord Frost, maybe better known as Hoar Frost. Lord Frost comes after a cloudless night. He arrives either at night or early morning when heat is rapidly lost into the atmosphere. The most air close to the ground is quickly cooled and frozen. This frozen dew then forms a thick, white, icy sediment; the trademark of Hoar Frost.

Another figure that drifts pass is Rime Frost. His super-cooled water droplets of fog freeze on contact with the surfaces he drifts past resulting in rough, white icy crystals on the windward side of tree branches, fences and hedges.

On cold, dry days when there is a severe frost and no moisture in the air to form any white droplets Black Frost makes his appearance.

While on cold, rainy days Glazed Frost comes along as the rain freezes on contact with cold surfaces, producing an icy film. On days like that the roads are visited by the notorious Black Ice. 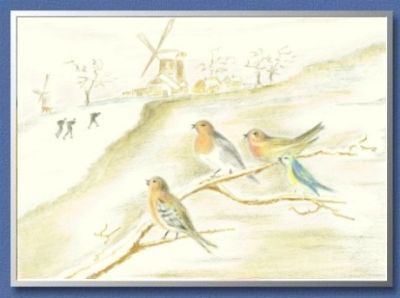 No wonder that the Celts referred to the month of January as 'Riuros' meaning Cold-Time or 'Anagantios' which means stay-home time.

I leant upon a coppice gate
when Frost was spectre-gray,
and Winter's dregs made desolate
the weakening eye of day.
The tangled bine-stems scored the sky
like strings of broken lyres,
and all mankind that haunted nigh
had sought their household fires.

The land's sharp features seemed to be
the Century's corpse outleant,
his crypt the cloudy-canopy,
the wind his death-lament.
The ancient pulse of germ and birth
was shrunken hard and dry,
and every spirit upon earth
seemed fervourless as I.

At once a voice arose among
the bleak twigs overhead
in a full-hearted evensong
of joy illimited;
an aged thrush, frail, gaunt, and small,
in blast-beruffled plume,
had chosen thus to fling his soul
upon the growing gloom.

So little cause for carolings
of such ecstatic sound
was written on terrestrial things
afar of nigh around,
that I could think there trembled through
his happy good-night air
some blessed Hope, whereof he knew
and I was unaware.


The month of January recalls the Roman God 'Janus'. He is the guardian of all gates and doors and known as the two-faced god who can look in opposite directions at the same time. His temple in Rome was open in wartimes and closed during times of peace. During the whole Roman history it only closed three times.
January was named for Janus because he is at the gate, looking both backwards to the old year and ahead to the new. 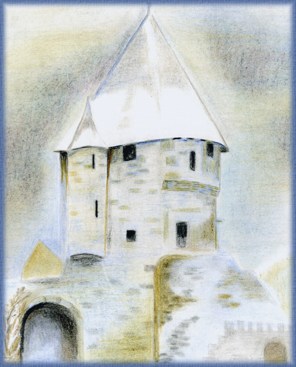 A short well-known parable by Franz Kafka
About a door, a doorkeeper and a man from the country. Read >>


In the early days of Rome, the year comprised only ten, roughly lunar months from March to December. They excluded the 'dead' or 'fallow' period, which now comprises January and February. This was a common practice and parallels have been found in places as far apart
as Africa and New Zealand.

Noma Pompillus, according to tradition the second king of Rome, is supposed to have introduced the months January and February somewhere in the seventh century BC.
But it was not until 1752 (AD!) that we changed to the 'new style' or 'Gregorian' calendar and January, instead of March, became the start
of our year.

Native Americans didn't record time like the Romans. To keep track of time however tribes gave each full moon a name. It wasn't an uniform system as different tribes tended to name and count moons differently. Some, for example counted 12 moons in a year while others said there were 13.
Colonial Americans adopted some of these moon names which is why they're still in existence today. The January full moon is named Old Moon. But its other name is Wolf Moon.

After the festive season many people feel low when going back to work. Blue Monday, the third Monday in January, is said to be the most depressing day of the year. If you do feel a bit low why not try our 'Sunshine Special' >>

A snowflake is one of God's most fragile creations,
but look what they can do when they stick together!

Other Tales from the Northern Forests  >>